October first is a very important day for me, personally. It’s not necessarily anything that involves beer. October 1st is a day that my life changed, even before I had a life to change. October 1st is the day that the world was first welcomed to greet the future, and experience imagination and technology, arts and science, world cultures. October 1st will forever mark the day that both the world and the World changed forever. October 1st, 1982 is the day the Experimental Prototype City of Tomorrow opened it’s gates and welcomed all of us to a place like no other. That’s the day my home opened. That’s the day my heart changed, even though I wouldn’t even have a heart for another 11 years. That’s my day.

But since my life is bitter and cold, I could not be home on such an important day. Instead, I was enjoying brunch and planning on attending the Pabst History Tour (post to come) while wistfully following all the activities of the 35th anniversary celebration by proxy through my friends on SnapChat and Facebook and Instagram. I did toast to Epcot at brunch while all my friends who don’t understand how to accept their lord and savior, Figment, into their hearts stared at me with deep concern that I had finally, officially, lost my mind. But then, like a sign from the heavens, while sipping a beermosa on the gorgeous fall morning, a man wandered past the establishment in which we were dining wearing lederhosen. At first we thought, Oh, maybe that old man works at the Old German Beer Hall which was just a few storefront down from us. But he seemed old. And then another passed. I got nostalgic for things like Werthers caramels and the currywurst of the Germany pavilion at Epcot and shared an antidote about how my adviser in college’s wife’s uncle was from Germany and when he retired he moved to Florida and now works in Germany at Epcot. Jake also spent a month in German and tried to steal my emotions by talking about how he’s actually been to Germany, but I couldn’t be deterred. Epcot was my home. Germany was just a social experiment for himself.

And so, we concluded our brunch, with time to spare before our tour, we followed the growing, raucous sounds of polka music and crowds of people and found what we were not looking for but have always been seeking. An Oktoberfest celebration put on by Milwaukee County Parks on the Milwaukee River. And that was the moment we made content on the fly. So, without further adieu, on this special not-on-format-but-still-on-brand edition of Daze of Beer, we drink beer outside and listen to polka at Oktoberfest.

As I said, we stumbled upon this celebration already in full swing although it was around noon. The delightful thing about Wisconsinites and Germans and people who enjoy German culture is that it’s never too early to have a beer, especially if you’re having a beer outside with other people. That’s hard science. Go ahead, if you’re sitting on your porch at 8am and there are at least three other people on said porch and you and at least one of those other people have a beer in hand, if you crack it, no one will judge you. In some niche circles, they will cheer you on. We have normalized alcoholism and it’s quite charming.

So, we figured, what the h*ck, might as well beer with the best of them. Jake, being the bold and bawdy bard that he is, got a litre and started with the Staten Oktoberfest. Jake definitely also started this impromptu content creation with the bold claim of “This is actually pretty yummy. This might be my favorite Oktoberfest beer.” And I trust him on that quote I actually wrote down, because he’s been to Germany and also, he also made some intelligent remarks on Third Space’s attempt at an Oktoberfest beer previously. Tim got himself the Goose Fest Bier. Then Ashley and I both got the New Glarius Staghorn. 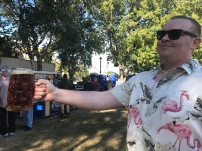 We stood around and took some beautiful, well lit photos while I just kept repeating “This. Makes. Me. So. Happy.” I really like drinking outside during nice weather. It’s strange as a person who does not typically enjoy the outdoors, but I like being within the safe confines of  a city setting, as were on this fine day, with the sun shining, drinking a beer. But unfortunately, joy cannot last forever, and we could only drink one lonesome beer before having to say “auf wiedersehen” to the entire party to catch our Pabst tour. But fret not, fore following our tour, we returned. 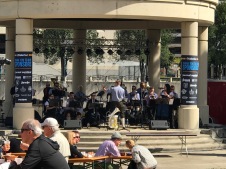 Upon our arrival back to Oktoberfest, we immediately grabbed a beer because again, can’t just stand around outside and not drink. That’d be a waste of time. Jake got the Staghorn Little, Tim went with the Sprecker Oktoberfest, as did Ashley, and I got the Spaten Lager. We also grabbed some food. Brunch was far behind us and the fall sun was starting to lay low in the sky, and it was time for late lunch/early dinner. We all got brats and chips and also someone got cheese curds that were quite good. And in the tradition of German beer halls, we sat at a long communal table (actually just several picnic tables pushed together) and that’s when we were regaled with tales by drunken bags players about how the bags tournament is horseshit. They laid out their plight, expressed their emotions, looked for our advice, and Jake said, “Yeah, sounds like horseshit.” And that’s how Jake made friends with drunk bags players at Oktoberfest. Our German forefathers would be so. proud.

We enjoyed some more polka, but the festivities were winding down. The beer wasn’t flowing and the crowds were thinning. Also, I had planned on a taking a nap that day when I left my house around 10am and now I was finding it closing in on 5pm and I was exhausted. So we gathered our lives together and headed home.

Next time, we hear more about that Pabst History Tour. It’s not a brewery but there’s still beer!