It’s legitimately comical isn’t it? Like, these posts keep rolling out in an unprecedented frequency and with every new post there seems to be no sign I’ve ever even been to Denver? Like, I think maybe the closest I’ve “been” according to this blog at this point is like, Aurora? I swear I live in Denver. But I’m just not ~vibin~ with Denver. Although, if you’re curious as to where I am the “should I stay or should I go?” front, I’m on the stay. I’m developing that dangerous kind of freedom around here. And, as much as I love you guys (my friends back in Milwaukee), being home for Christmas (and again in a few weeks for Doughboys) has reminded me how absolutely soul-sucking that environment can be. It’s a city that demands we settle and I might be giving up but I’m not settling yet.

But anyways, back to the blog. It’s gotta be unhealthy for me to open every single one of these with a weird lament about what life is and how life became as it is. Whatever. My sister’s visited the first weekend of November and we went up to Estes for the day and had lunch at the Estes Park Brewery!

We ate at a weird time of the day, which would probably partially account for the fact that there was only one large family with a million kids running around in there and no one else. But I don’t know how to adequetely describe the weird Wisconsin Northwoods vibe of this place. Like, it felt like the back hall of a VFW and not a brewpub or anywhere fit for people to actually visit? Too harsh?

Anyways, I had two beers and my sisters and I had an app sampler because we decided that maybe we wanted to eat somewhere else. (Somewhere else ended up just being Freddy’s in Longmont like hours and hours later). The first beer I had was a Renegade IPA which I gave 2/5 on untappd. Which, ooft. Brutal. I don’t have any notes (of course) so I don’t know why I didn’t like it. I just know that I didn’t. And then the second beer I had was The Shining APA which I gave an even crueler 1.75 on Untappd. 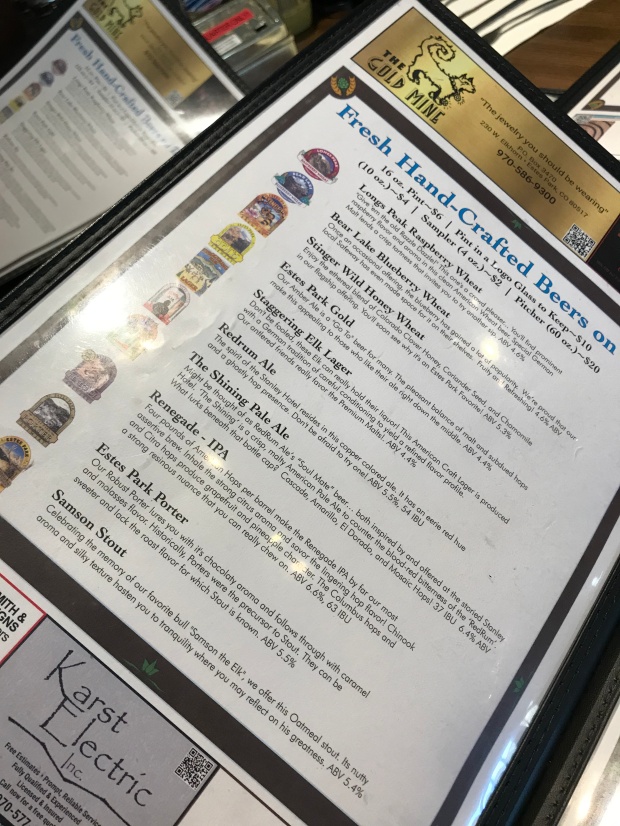 This is so uncharacteristically mean of me, but I also know that the whole experience at the brewpub was also just kind of unwelcoming. The apps felt like microwaved fare. The server was weirdly perturbed that we were there? I don’t know. Whatever. If you’re ever in Estes, do whatever the fuck you want. But I would recommend dressing in period attire and getting a drink at the Stanley Hotel instead.

(My sisters and I did the nighttime Stanley Hotel tour and 10/10, would recommend).