I don’t want anyone to get overly excited, but I have some news. On the eighth day of July in the year of our lord two thousand and seventeen, something miraculous occurred. Something that has been so long discussed, dreamed about, longed for. Something that could possibly change the course of history, but mostly just change the course of this blog. On this day, July 8, 2017, Daze of Beer officially started.

Alright everyone, calm down. Focus back in. Let’s talk about it. Let’s dig deep on exactly what occurred on this day that made it so remarkable. Ashley, Jake, and I, with special guest appearance by Karen Smith, decided that we had waited long enough and booked a brewery tour at MobCraft Beer on 5th and Virginia down in Walker’s Point. As Daze of Beer progresses, you’ll start to notice that a lot of breweries we intend to visit will be in Walker’s Point. As previous stated in the CurdFest post, that has a lot to do with the fact that Walker’s Point used to be a very industrial neighborhood and now many of those factories and warehouses are empty and leave enough space to brew some beer. So over the course of the next few weeks (or months or years), we will become very familiar with Walker’s Point.

Saturday was a beautiful day, too. The weather was warm but not hot, the humidity was low for the first time in weeks, and the sun was shining. It was overall a lovely day to be bumming around the city. So we booked our tour using Groupon, which got us the tour for half price. They run tours every Friday and Saturday assuming there is enough interest and included with the price of the tour is two drink chips per person good for any of the beers on tap.

Upon arrival, the place was busy. Or, as is so important to Jake for me to tell you, it’s was hoppin’. Don’t worry, guys, I stared at him with so much disdain for a quarter of a century to let him know that I did not approve of his puns. But, though, he was not wrong. The bar in the taprooms was two-deep and every table inside and the picnic tables outside were full of people. There were also some fun table games, like foosball and ping pong, that had some intense games in progress when we arrived. The nice thing about it, though, was that it definitely felt busy but it by no means felt crowded. The taproom was lined with garage doors that were all open to all for a breezy indoor-outdoor feel and allowing for people to be able to smoothly float in and out of the bar to get drinks and to allow the more nature-averse among us to take in fresh air while still shielding our delicate skin from the harmful rays of sunlight. The vibe was chill and the staff was friendly.

There’s a fear I harbor whenever I enter places like this, microbreweries in trendy areas. It’s that people will be so absorbed with their pretension that when someone who does fit the prescribed “hipster” look will be greeted with a cold judgement. That’s certainly what I had to overcome in Salt Lake, and it’s a constant source of anxiety. But there was none of that here. Everyone was just enjoying beer and not giving a shit about who you were because clearly you also enjoy beer, and that’s all that matters. No one had shitty hipster attitudes and no one seemed like beer snobs. Everyone just kept to themselves and smiled and cleared an inch of space at the bar so you could order your beer just like everyone else. Excellent culture. 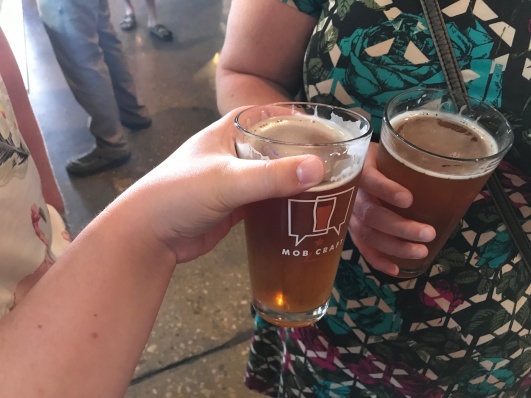 With our two drink chips in hand, we decided to enjoy a beer before/during the tour. Ashley started with a Booze Cruise which is a saison beer. Direct quote from Ashley on her opinions on the beer, “Booze Cruise was amazing. I could literally drink it on a booze cruise all day.” Seems like a glowing endorsement if you ask me. Jake got an Oddball first, which, as Henry, co-owner/co-founder/tour guide, described as “Beer flavored beer.” Jake loved it. Karen got a Man-Go Away, which was a double IPA which was heavily mango flavored. We all sipped it and loved it. I mean, what’s there not to like about a double IPA that also suggests that men suck and should just go away. Fight the patriarchy. My first beer, then, was the rhubarb IPA which was also just delightful. Our first rounds really set the stage for what would become a very hard act to follow in terms of Daze of Beer.

Then there was the tour we took. I don’t want to spoil anything about this tour, but my major takeaways were:

One of the coolest things to mention about ModCraft, though, is the way they decide to make new beers. They crowdsource to get ideas. People submit ideas on their website for what they think would make a good flavor, then if enough people vote for it, it gets brewed in a small batch. Then people can pre-order the beer and sample it in the taproom and if enough people drink it and buy it, it becomes a REAL beer. And if your beer idea becomes a REAL beer, you get free beer for life. Guys, remember above when I said I didn’t have a dream job to follow? Well, I still don’t, but I do have a general dream and it is free. Beer. For. Life. Also note that I may have gotten the technical details wrong, but obviously this is all also available on their website which is definitely more reliable than me, a girl who just heard free beer for life and instantly stopped caring about anything other than achieving such a dream.

After the tour we got to have a sweet little gabfest with Henry, co-founder/co-owner/tour guide. He’s a nice guy who knows his shit and isn’t an asshole about it. Again, super chill vibes. Then we enjoyed a second beer a piece. Jake got the Roundabout Pineapple which was a weisse ale that he liked a lot. Also, shout out to JD who Jake purchased this beer in honor of. JD loves pineapple, helped talk me through the purchasing of this domain, and is, lastly and most importantly, not dead but we’ll still pour one out for him anyways because he lives in Los Angeles and that’s as good as dead, so… Karen then got the Oddball because we’ve already established that it’s just a good German style beer and who doesn’t enjoy one of those on a breezy summer afternoon? Ashley got a rhubarb IPA because I sold her on it as I am the best salesperson around. And my second beer was the Sour Support. I just adore sour beers guys and I am happy to see more of them and that they aren’t all costing like $12/pint.

At this point the taproom had cleared out a bit. People were probably moseying off to grab dinner or to hit up another local brewery. We enjoyed our second beers while also engaging in a cutthroat game of foos which Jake and I dominated our opponents, Ashley and Karen.

In summation, this must have been a terribly boring entry for it being the first Daze of Beer official outing, but goddamn this place was just outstanding. And it sucks that there are other breweries that are going to have to try to beat this act. I know that everything else from here will probably also be brilliant and enjoyable in their own ways, but this really set a high bar. I cannot wait to go back to MobCraft to just hangout in the taproom on a beautiful afternoon (especially if Ashley does move to Bay View) and I cannot wait to see what beers they brew next. Everything we drank was flavorful and developed and distinguished. The people were not assholes. The entire atmosphere just welcomed you in like a warm hug. Too much? Well, I don’t care. I’m glad we could start our journey here and here’s to the next outing, whatever that may hold.