Honestly, if we were going to nail down the aesthetic of this blog it would be “simple yet focused premise but still cannot seem to maintain a theme.” Just look at how this blog has been going so far. How many Milwaukee breweries have we actually been to? Three? Sure, there have been other miscellaneous events and breweries here and there, but that doesn’t adhere to the premise which was simply visit every Milwaukee brewery and write a blog post about it to get a hands-on knowledge and appreciate for beer culture. See how simple that reads? It’s a great logline if I were to run into a producer in an elevator and wanted to pitch them my blog to be adapted into a Travel Channel show. Simple. But somehow I still cannot maintain that theme. So, that brings us to today, which is part one of four on our special Baltimore Series that shall henceforth be known as Good Morning Beertimore!

So, I decided to take a long weekend to visit Nicole in Baltimore for her birthday and I figured, what better way to celebrate my best friend’s birthday weekend than by making her go to breweries with me although she does not like beer. So on Saturday, September 8th after bumming around Hampdenfest, we would hit up a brewery. Briefly, I will tell you that Hampdenfest was fine. It was a pretty run-of-the-mill street festival with food and beer vendors and a bunch of people just milling about. The one noteworthy thing to mention about Hampdenfest was that there are toilet races? I know. People decorate toilets and form teams and RACE THEM. Like, down a hill. There are costumes and cheering and themes. It was quite the sight to behold. But that is not why you are here. You are here to hear about Union Craft Brewing. 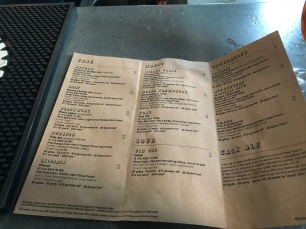 Union is also in the Hampden/Woodbury neighborhood, but since travel efficiency is not one of my high points, first Nicole and I tried to hit up a cemetery which was like fifteen minutes away and closed. So then we were like, “Well, we can check out a brewery now I guess?” And it was honestly like, five minutes from The Aveune*.

I made it to the cemetery eventually.

Full disclosure, while I did want to hit up as many breweries as possible and Union was on the list, it was not what we were aiming for. We were aiming for Waverly Brewing, but could not find it. The GPS proudly announced that you are here! but we did not know where here was. But Union is on the same street and just slightly further down so we decided to start there, which I am glad we did because they closed at six and it was already a little after four.

The taproom is small, but definitely has that familiar craft beer charm to it. Along with the cute little taproom was also an outside patio that had picnic tables where people were sitting outside on the nice Saturday afternoon with their friends and dogs. There was also bags. Nicole and I ordered our first beers, hers was the Old Pro Gose Sour and I got the Royal Farmhouse Double IPA. Nicole loves sours and she did really enjoy this beer. I also liked mine quite a bit. Nicole, however, did not like my beer. I mean, I shouldn’t be offended because she does not like IPAs at all and I suppose I am not offended but she had a very vocal opinion on what it tastes like. Grass. She thought it tasted like grass. In turn, most of the rest of the weekend devolved into this following gif for the two of us.

Nicole also really wanted to play bags with me at this point, or as she insists on calling it, cornhole. But the problem with this request is one, what the eff is corn hole amirite? But also, two I am terrible at bags. And so is she. Can you imagine how embarrassing it would be for me and my street cred if the entire city of Baltimore found out how bad I am at bags? It would almost be as bad as if they found out I run a beer blog (which the entire city might already actually know because Nicole is a good friend who promotes as if it actually matters).

For our second rounds, I got the Steady Eddie Wheat IPA and Nicole got the Mid-Century Modern Belgium Table Beer. First off, shout out to the guys at Union for just know what they have on tap and how to help out a helpless girl trying to get her life together (me). I wandered in from the patio for our second round and Nicole just said to me “the table beer one. It’s Belgium.” And I wanted to seem in the know when I got in there, but no matter how quickly I scanned the board I could not figure out what she meant or what it might be called so when the guy came over to as me what I would like, I stuttered and panicked and said, “I dunno some Belgium one? Table beer?” And then magically he was like mid-pour of what I wanted and was like “Yeah, it’s the Mid-Century Modern.” And I was like, you, kind sir, get it. And he didn’t even throw any beer-itude at me about not knowing what exactly I was trying to order. And that has taught me that I think I have a misguided fear about breweries.

Although now in my life I have been to many taprooms and many tours and many beer halls and gardens and keggers (two truths and a lie time), I still always feel like I do not belong there and that I will be met with judgement, but know what? People working at breweries do not care about my bullshit because they are just doing their jobs and do not care enough to judge me. They just see a girl who wants to expand her beer horizons and, more importantly, is willing to pay $7 for a craft beer rather than $4 for a Busch Latte. Sure, there are some elitist assholes that exist within some of these breweries who will side eye me, but honestly, I think I fit the profile more than I think I do. And that’s not exactly something I am proud of. I’m not looking to fit any profile and certainly not the hipster beer snob profile, but I dress just like the rest of them (homeless-chic) and talk like them (oh wow, I am definitely getting the subtle notes of witchhazel in this experimental small batch!) and I think like them (Bernie would’ve won if only we could have KCCO’d and if they would have released season 5 of House of Cards soon #UnderwoodUnderwood16 #teamFitivia #JedBartlettIsMyPresident). I need to get over my self absorded, self-conscious, “I’m doing this ironically” attitude and just drink beer and realize that I am the person who drinks beer. Sure I might tell everyone my favorite beer is Landshark, but honestly, my favorite beer is Third Space’s Happy Place. I am no better or worse than anyone else that chooses to spend their Saturday afternoon in a parking lot patio at a brewery in some trendy neighborhood in Baltimore. It is who I am and I should just embrace that about myself. 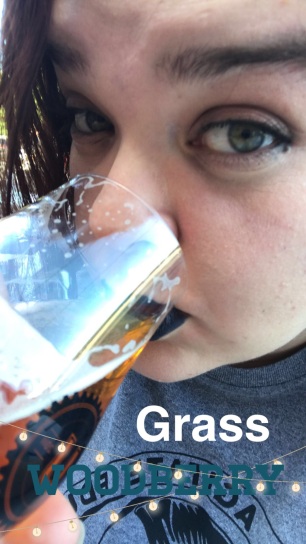 Anyways, comments on Nicole’s beer were that her and I kept passing it back and forthing trying to figure out how we feel about it. Honestly, it just sort of tasted like nothing. I mean, I kept saying that it tasted like a crouton which is just to say that it was very wheat-y, which is to be expected from a Belgium beer but since I am not like good at beer yet, I could only articulate that as “IT TASTES LIKE A CROUTON!” Again, if you came here for facts, you came to the wrong place. Honestly, if you came here at at all, you came to the wrong place. Go outside, take a deep breath, and ask yourself, do you really want to spend the limited amount of time you have on this earth reading this blog? If the answer is yes, welcome back. Let’s continue.

My second beer, the Steady Eddie, was good. It was another IPA, Nicole still thought it tasted like grass. I thought it was fine. Didn’t knock off my pants or anything (mostly because I was wearing a skirt but sh) but it definitely served it’s purpose. We had fun sitting around, though. But, sadly, we were only able to enjoy these two beers apiece because they closed on us. I mean, we knew it was coming. The internet did warn that they closed at 5, although did not actually close until 6, and we did arrive around 4. But still, it’s hard to have a Beer trip when there is only two of you and you can only get two beers apiece. It makes it hard to fully appreciate and sample a wide variety of the menu offerings. So while I have learned that five beers is too many, when there are only two of you, two beers/piece is not enough. I’m not saying that I need to drink more than two full beers, but just sampling the four beers between Nicole and I did not give me a wide ranging opinion on the brewery in whole.

In terms of vibe, though, it was very chill. Very laid back. Overall, Union was a cool place. I would definitely recommend checking out if you are in Baltimore, especially since there aren’t many alternative options in the city.

Come back next time for more Baltimore beer!