It has come to my attention that I have not been writing these posts in any particular or succinct manner. Apparently I went to this brewery and never wrote about it, which is very similar to what happened with Enlightened, except I definitely got emotional while writing the Enlightened post (for obvious reasons) whereas there will be no emotion here. Here is the cold, hard, mean facts about a brewery in Aurora that I went to the first week of September (yes, it is currently New Year’s Eve and the sun is setting on this decade).

But I really did not have too great of a time at this brewery so I never felt a strong compulsion to get into it. The thing that I’ve discovered about myself in recent weeks/months/lifetimes is that I feel bad shit talking breweries now. Not that this place is worthy of shit taking. It wasn’t that bad. It was just a bummer. But I should note that everything that happens in Aurora is a bummer. This was before I figured out that I do not vibe with the city of Aurora. I am going to wholly blame Aurora for this. It is a sprawling, personality-less wasteland just east of Denver that went from being a suburb to a whole ass, all consuming city of it’s own. The population of Aurora is angling it to be the St. Paul to Denver’s Minneapolis. The Twin Cities of the West. And must like how people scoff and whisper warnings about St. Paul, that’s how people treat Aurora. This dingy and less glamorous version of their neighbors to the west. Slightly cheaper housing, endless anonymous houses and rundown apartment complexes. Disillusioned faces of one time hopeful Denverites who wanted to own property and found themselves stuck in Aurora. There is a reason that I don’t live in Aurora although my campus is in Aurora. It’s because Aurora is a huge. Fucking. Bummer.

But I didn’t know that when I went to this brewery. I had been in Colorado scarcely three weeks at this point. And that night was going to see IT at a theatre in Aurora (that I still occasionally go to and is one of the few things in Aurora I actually visit). Anyways, I should just say that I went to Launch Pad Brewery for beer because I saw on some list somewhere that it was one of the best breweries in Aurora. Which, I mean, I guess is an accomplishment because Denver’s brewery scene is so bumpin’ that it’s now bleeding into Colorado’s largest city by land area now.

I should note that the beertender (I still hate that word) told me I could not have the first beer I ordered because the keg kicked and she “didn’t feel like” changing it. Actually what she told me. It was weird. I could understand if there just wasn’t more of that kind of beer? And maybe that is what she meant to say? But she legitimately told me she just didn’t feel like changing the keg. But whatever fine.

As is now becoming a habit, I do not have notes on this brewery. But I did document everything I drank on Untappd. (Also, if we’re not friends on Untappd you can friend me @upside-) The first beer that it appears I drank was the Project Highwater which was a altbier. I gave it a middling rating of a 3.0 on Untappd, but since it’s a German style beer, that makes sense. I’m really become that asshole who likes to push off the more traditional beer flavors in favor of dumb shit like kumquat or whatever the fuck American craft brewers are doing with their IPAs and shit these days. The second peer I had was a Project Apollo and lo and behold, it appears I liked it. Wanna know why? It was an APA and I’m insufferable. The last beer I had noted was the Ariane 6 which I gave another 3 to although it was an IPA. 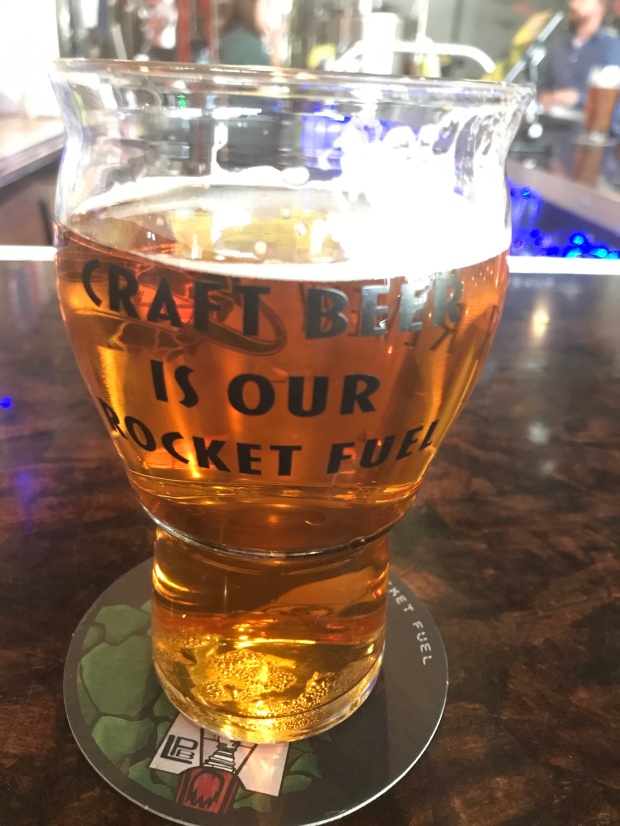 I do think I had more to drink than this because I remember feeling pretty ~good~ when I was done drinking, and this was way back in the days when I had a tolerance for alcohol. But that is the point in which I stopped checking in beers on Untappd. The brewery was fine, honestly. The beers were fine. The vibe was weird but I was also there in the middle of the day on a Thursday in September. But, whatever. I just had to purge this one from the memory banks and continue on with this journey. See y’all in 2020. Maybe things will get better although I’m pretty sure they’re going to get worse.