I tried my best. That’s where I am going to start today. By letting you know that I tried my best. What this post was supposed to be was about the history of Blatz brewing in Milwaukee. How they started here, why they left, where they are now. It was supposed to talk about the beautiful old buildings downtown that have since been converted into various condos and businesses and urban thought spaces. That was the plan. I made an effort. Back in November I bought a Groupon for a 4-pack for the tour. It was half off, then they were doing 20% off for Black Friday. I got the deal for $20 total.

But the holidays happened and life got busy. And the winter is so cold and leaving the house yields too much effort sometimes. I was on vacation for two weeks. My friends had their own various life activities happening. The time was running out. Groupons are only good for 90 days. But then we found a weekend. Our last weekend. And we made it happen. We planned to go. We planned to take this tour. But the instructions were vague. No where on the website for the Blatz tour were there any instructions as to how to book with Groupons. Only a way to buy tickets full price. On the Groupon itself, it literally just said “show up and present Groupon.” So we called. And they guy on the phone was an asshole. First of all, the website itself was a mess and a half. It looked thrown together by someone in haste with the intention to finish it later and they just never did. Also, it was incredibly hard to find a phone number to contact them by. And the last issue was that there was conflicting information as to where this place even was. The address was list differently in different places of their website. Some things said it was located above Bar Louie and other things said it was located across the street from Bar Louie. Very different locations. Water Street is a wide street guys. So anyways, Ashley calls and the man who answers sounded like he was picking up his personal cell phone and the background noise made it sound like he was running errands in his general life. She asked about the Groupon and he proceeded to make a big show about HE SUPPOSES he could SQUEEZE US onto a tour although we are supposed to book WAY IN ADVANCE but if we SHOW UP he will DO HIS BEST. Mind you, online it was showing 20/20 spots available for the tour we planned on attending.

But anyways, we show up. Or, well, no. We did not show up. Because we could not find the place. We wandered around Water Street, circling Bar Louie, reading addresses, examining signs, walking down alleys, looking for any indication that we might be remotely close to the address given. (Also, I should mention that some of the places the address was listed just straight up gave Bar Louie’s address). We couldn’t find it. Couldn’t find anything. Couldn’t find the nondescript door some people described. Couldn’t find the staircase some people mentioned online. Couldn’t find anything. So we said fuck it and went to the new arcade bar on Old World 3rd called 1983. And guess what? It was a delight. So what if I burned $20 on a Groupon that I never got to use? Instead, I got to play pinball and drink craft beer from Utah for hours. The Sunday afternoon vibe was chill and the staff were delightful, as long as you didn’t try to get a beer during their smoke breaks that they would not pause for anybody. We had a good time. We also took a lot of pictures because for once, I actually started to look at different camera settings on both my phone and Tim’s and realized, oh. Maybe they aren’t just bullshitting us with all those demo photos on commercials to sell us phones? Maybe I just don’t know how to use my phone? Also, there may have just been something about the lighting of the bar that made me feel so inspired about how my cell phone photos were turning out. OR MAYBE pinball machines are just he most photogenic type of machine. 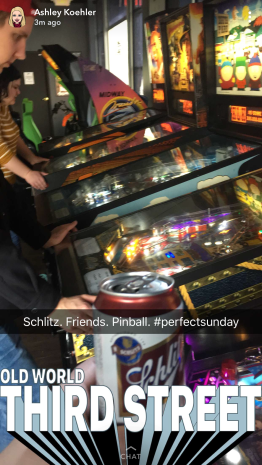 That’s what life is. Failed plans. Broken promises. Pinball. Arcade games. Billie Jean. The day was short, this post is short, but I had to let everyone know that one, don’t buy the Blatz Groupon. It’s not worth the hassle. And two, adventure is out there if you’re just willing to wander around an urban area long enough to find that one arcade bar you think you may have heard about on Facebook somewhere. Godspeed, minions. Godspeed.

One thought on “Not The Blatz History Tour, Downtown Milwaukee”